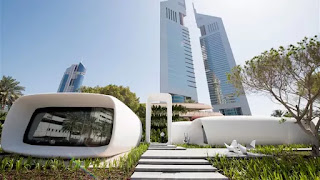 
SOURCE
The value of 3D printing technology based construction sector in Dubai will be $816 million (AED3bn) by 2025.

A quarter of Dubai buildings will be build using 3D printed components by 2030, authorities announced on Wednesday in a new strategy designed to exploit the potential for the new production techniques.
"The future does not wait for those who hesitate and slow down. The next stage requires us to act fast and utilise the opportunities," Sheikh Mohammed bin Rashid Al Maktoum, vice president and prime minister of the United Arab Emirates (UAE) and ruler of Dubai, was quoted as saying in a press statement to mark the launch of the 'Dubai 3D Printing Strategy'.
"Our key goal is to ensure that 25 per cent of buildings in Dubai are based on 3D printing technology by 2030, and we will raise this percentage with the development of global technology as well as growth of market demand," he added.
"We believe that this technology is capable of transforming the construction sector by lowering costs and reducing the time it takes to implement projects. It will also help reduce manpower requirements as well as waste generated from construction which can be harmful to the environment."
The strategy aims to turn the emirate into a global hub 3D printing and Sheikh Mohammed called on all government agencies, private sector companies, universities and research centres to embrace the new technology.
Three sectors have been highlighted as part of the government plans: construction, medical products and consumer products.
The authors of the report estimate that the value of 3D printing technology based construction sector in Dubai will be $816 million (AED3bn)  by 2025.
The medical sector will include innovations such as 3D printed teeth, bones, artificial organs, medical and surgical devices and hearing aids and is estimated to be worth around AED1.7bn by 2025.
The consumer products sector will cover products such as household items, optics, fashion jewellery, children's games and fast food and is forecast to be valued at around AED2.8bn by 2025.
The global market for 3D printing is forecast to be worth $120 billion by 2020 and to reach $300 billion by 2025, the press statement said. It estimated that use of the new form of production over the timeframe could cut construction costs by up to 70 per cent, reduce labour costs by up to 80 per cent and eliminate construction waste by up to 60 per cent.